Notary Chamber of Georgia is the union of notaries based on their compulsory membership and   principles of self-governing. According to the Georgian Law, the Notary Chamber is a legal entity of public law, which isn't financed from the state budget. Each member of chamber is obliged to pay membership dues. 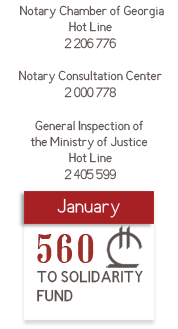